The Hi Hi’s travelled to meet Premier Division side Penicuik Athletic at Penicuik Park last Saturday in their final pre season friendly. Manager Joe Hamill was missing a few players and he fielded a youthful defence with Cammy Watson, Nicky Aitchieson and Guy McGarry all featuring in the starting line up. There was little between the sides in a keenly contested ninety minutes and Haddington matched their Premier Division opponents.

Shaun Hill broke the deadlock in the 40th minute when he volleyed in a corner from the left. Penicuik grabbed the equaliser in first half time added on when the Hi Hi’s rearguard failed to deal with a cross from Baptie and Reid nipped into head the equaliser. Both sides had chances in the second half with the home side shading possession. Cornet saved well from a Baptie free kick but the Hi Hi’s defence stood firm and with only ten minutes remaining a Penicuik defender deliberately handled an Auriemma free kick and Hill scored from the spot. Penicuik came close to a late equaliser when Tansey rattled Cornet’s left hand post but the ball was scrambled clear.

So three pre season matches against Premier opposition has produced two wins and a defeat in the match against Musselburgh where the Hi Hi’s were unfortunate to lose 1 0. 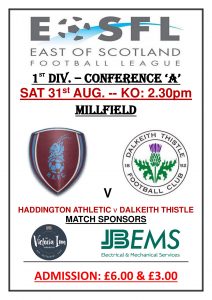